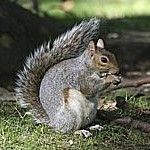 Raccoons
One of Long Island’s most common nuisance animals. Population densities have been estimated at 65+ raccoons per square mile across most of Long Island. Raccoons mate in January-February. 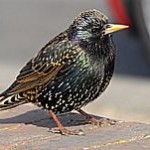 Birds
There are many nuisance birds on Long Island. Pigeons, Starlings, English Sparrows and Woodpeckers are some of the common nuisance birds. Birds often become a nuisance when they roost, nest or feed in large numbers. 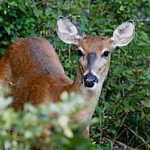 Deer
The deer problem on Long Island has accelerated in recent years due to several factors. As the ever-increasing suburban sprawl continues to expand, it actually creates perfect environs where deer can proliferate at alarming rates. 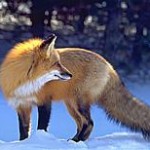 Red Fox
The Red Fox is more common on Long Island than most people are aware of. Red Fox can be found from New York City to Montauk. Red Fox can become a nuisance for homeowners with pets especially during the mating season and when vixen fox have their pups. 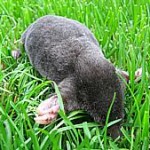 Moles
Moles are a headache to many Long Island homeowners who put their sweat and pride into their landscaping and lawns. Moles tunnel at 18 feet an hour. 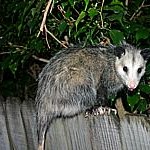 Opossum
An opossum is a fairly common nuisance in Long Island neighborhoods. Generally, these animals do not create the kind of damage that Raccoons and Squirrels can but often use pre-existing gaps and crevices to work their way into the home. 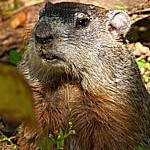 Woodchucks
An increasingly more common nuisance animal on eastern Long Island. As more agricultural land is developed woodchucks are beginning to utilize backyard gardens as food sources and are burrowing under fences, sheds and decks to den and rear their young. 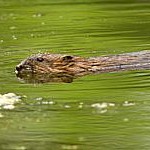 Muskrats
An occasional nuisance to homeowners who live near a pond or marsh. Muskrats will eat aquatic plants in landscaping ponds, erode the banks of a pond with their dens and feeding burrows and sometimes take up residence in a swimming pool. 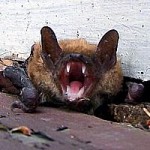 Bats
Bats get very little respect from most people who have problems with them or encounter them. Known to be “America’s most feared animal”, bats are very beneficial to our Long Island ecosystem.

"We want to thank you SO much for your hard work getting rid of the two raccoons in our roof. You were so wonderful to work with, always prompt and available to get ahold of when the raccoons were the biggest nuisance. When we first heard them, we thought we might have to wait days [...]" Auto Draft
"Let me say that if Craig could be our “repair guy” for everything, we would love it!   We had a terrible raccoon experience, although not nearly as bad as most people that go through this experience, and Craig took care of it the “right way”.  He is extremely professional.  I will miss him, but [...]" Auto Draft
"It went very smoothly. The removal expert came punctually, and was very humane and efficient in his work. He was also very courteous, which speaks volumes about the relative quality of the company." Auto Draft
"Craig Conway from Advanced Nuisance Wildlife Control Services Inc was professional, a pleasure to deal with, didn’t rush us, sat and talked to us, and patched up things on my house that needed to be patched up. He did great work and the price was comparable to competitors. He’s my wildlife therapist for peace of [...]" Auto Draft
"I needed 2 large custom chimney caps and Craig said he could get them for me. He measured and got me the quote in no time and ordered them. Trusting Craig, I didn’t shop around. I was confident it was fair. Peace of mind is most important to me! I wasn’t able to install them right [...]" Auto Draft
"I called Advanced after a horrible experience with another company in 2012 and wasn’t sure if I was free of racoons.Craig came and inspected and calmed me down that there weren’t any others or babies left behind.. He also told me how he would do a removal  or capture if he saw any sign of [...]" Auto Draft
"Craig was extremely knowledgeable about my situation and explained it in detail all along the way.  He checked all areas to ensure I was safe and was a true professional through the whole ordeal.  Even though he had to come back 3 times he never even hinted to raise the price.  I would recommend him [...]" Auto Draft